In southern W.Va., 5% of land has been mountaintop mined, but 22% of streams show harm from mining 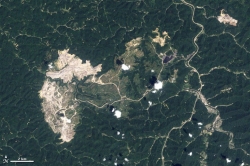 About 5 percent of southern West Virginia has been excavated by mountaintop-removal coal mining, but 22 percent of the region's streams show significant harm to aquatic life, according to a study by Duke University researchers. The study could have implications in other areas with high rates of surface mining. (NASA satellite image: mine in Boone County)

Researchers say large amounts of minerals leach into streams from valley fills that have been filled with rock blasted from the mountaintops and ridges above. Sara Peach of Chemical and Engineering News reports that researchers have previously documented water pollution near individual mines, but have not been able to detect how far the pollution traveled, study author Emily Bernhardt said. Her study found harm to aquatic life in more than 1,700 miles of streams in southern West Virginia.

Bernhardt and her co-authors mapped chemical and biological data from 223 streams sampled by the state Department of Environmental Protection between 1997 and 2007, and found that salinity and mineral levels in the region's streams increased with the total area of mountaintop mines. They also discovered that as the number of mines increased, fewer sensitive insect species were found downstream. Substantial declines in insect populations were seen with just 1 percent of upstream land mined. In areas where 5 percent of upstream land has been mined, so many species have disappeared that the streams would qualify as biologically impaired, a designation that would place the streams on a list of waterways that states have to rehabilitate. (Read more)
Written by Ivy Brashear Posted at 7/31/2012 12:32:00 PM