In the Texas Panhandle, the population is sparse, and in some counties getting sparser. That's bad news for the newspapers in the area, some of which are being forced to combine to stay alive. But that doesn't mean the end of competition.


Briscoe County had only 1,637 people at the 2010 census, but Sally Arnold Threet bought the Briscoe County News, and transformed it, writes Laverne Zabielski, who recently sold the Motley County Tribune to Threet: "It had come alive: full of stories, ads and photos. What that communicated to me was that Briscoe County was also alive." Before, "It seemed to represent a community that was dwindling and a newspaper on its way out. Other papers, however, were inspiring: The Clarendon Enterprise and The Canadian Record." 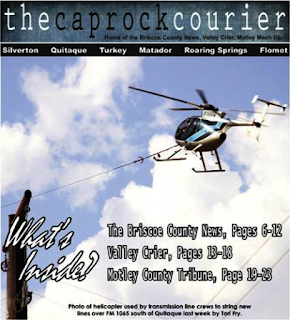 But looking good and making money aren't the same thing. Arnold says she had to cut back the paper's print edition to monthly, with weekly online updates, and expand its coverage and circulation area into parts of larger Hall County, to the east, and smaller Motley County, to the southeast, so it could survive and print biweekly. She dubbed the combination the Caprock Courier, after the geologic formation that underlies the Llano Estacado, the high plain of the Panhandle.

Zabielski wrote that she and her husband bought the Tribune in 2007 "because of its strong, historical connection to Motley County and because my ancestors had settled here," but family obligations forced them to move to Kentucky in 2008. They published the paper from there, with the help of digital technology and people in Motley County. (Motley is just outside the Panhandle, according to the more or less official definition, but is in the territory of the Panhandle Press Association.)

Ironically, Threet, 38, has also become a remote publisher, moving to Tennessee to be with her new husband. But her parents still live in Bricsoe County, and she says she has "lucked out" by having staff members who have many skills and don't need full-time employment at the Courier.

The three counties are also served by another newspaper, the weekly Valley Tribune, based at Quitaque, near the counties' conjunction. It is the successor of the Quitaque Tribune and is published by Becky and Luke Taylor, who bought it from family members Jan. 1. It does not put news online and bills itself as the "Voice of the Rolling Plains," the geographic area east of the Llano Estacado.