Controlling wild horses is becoming too costly, and numbers are too high for contraceptive darts 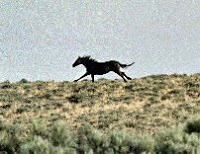 The wild horse population in the western U.S. is growing so fast that the government could soon be unable to manage the herds, according to a study published in Science magazine, Brad Plumer reports for The Washington Post. In their paper, Robert A. Garrott of Montana State University and Madan K. Oli of the University of Florida "argue that it’s long past time to get America’s horse issues under control. That would start with an aggressive vaccine contraceptives program to cut the birthrates of the wild horses by half," which won't be cheap, because the horses are hard to find and need to be shot annually with contraceptive darts.

But there are too many wild horses to rely solely on contraceptive darts, which have been used successfully on a relatively small number of wild horses in Colorado, Wyoming, Montana and Utah. The Bureau of Land Management would still need to find other ways "to remove many of the existing wild horses from public lands to bring the base population down to around 23,622," Plumer writes. There are an estimated 33,000 on public lands, and another 45,000 horses are in facilities, mostly on private ranches in Kansas and Oklahoma. (Graphic by Science magazine)

The problem with keeping all the horses in captivity is that "BLM’s horse budget has soared from $19.8 million in 2000 to $74.9 million in 2012," Plumer reports. And researchers calculate "that if current trends continue, BLM would have to spend some $1.1 billion over the next 17 years just to keep storing horses in these long-term facilities — a level far beyond anything Congress seems willing to contemplate."

So, what happens next? Some people have suggested that the best alternative is to "kill off thousands of healthy horses to bring the numbers down," Plumer writes. There is also fear that the western U.S. could end up like Australia, "where the wild horse population has soared past 400,000, and the government is now reportedly considering shooting tens of thousands of horses in the outback, both to stop the destruction of range land and to alleviate the suffering of horses that have been slowly dying of thirst during a recent drought."