Many states allow children at shooting ranges to fire any guns, like the Uzi that killed Arizona man

The accidental shooting death of a gun instructor Monday in Arizona by a nine-year-old girl who lost control of an Uzi may have raised some concerns about why a child was handling such a weapon. But in many states it's legal for people of all ages to fire guns of all types at shooting ranges, and in 30 states—almost all of them mostly rural—there is no minimum age for owning a long gun, Roberto Ferdman and Christopher Ingraham report for The Washington Post.

"The gun used at the shooting range incident, an Uzi, is a submachine gun that could be classified as either a handgun or a long gun depending on the model and any modifications to the gun," the Post writes. "While federal law would prohibit minors from owning the pistol version of the gun, there are no such federal restrictions on the rifle version."

Daniel Webster, the director of the Johns Hopkins Center for Gun Policy and Research, told the Post, "The laws aren't designed in essence to protect children from accidental shootings of this nature. There's a mindset that's fairly prevalent in the U.S. that there's nothing wrong with kids firing guns. A very common view of gun-owning parents is that what gun safety is all about is teaching your children rules. What they don't consider are the developmental issues and physical abilities of children to actually follow these instructions. It was obvious to me when I saw this nine-year-old girl holding an incredibly powerful gun like an Uzi. Why anyone was surprised when she couldn't handle the recoil is beyond me." (Read more) (Post graphic) 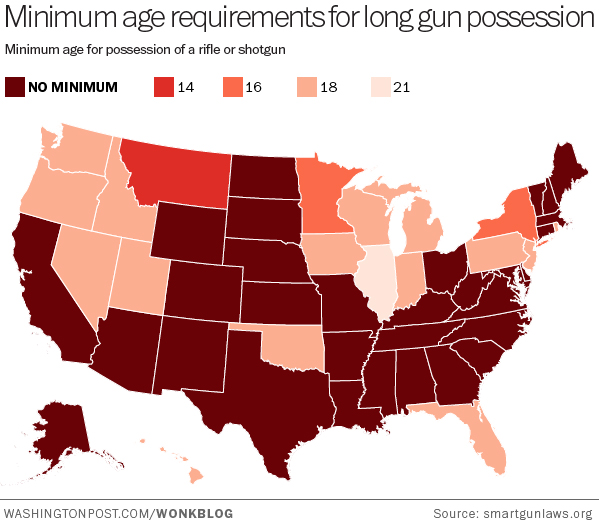