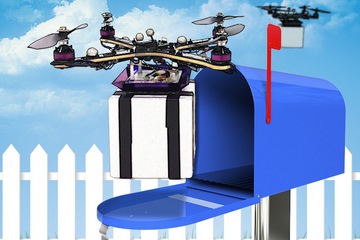 Some businesses envision a future where drones are used to deliver packages to consumers. In anticipation of that day, researchers at Massachusetts Institute of Technology "have created a program that lets robotic flyers monitor their own 'health' midflight," Tanya Lewis reports for Live Science. (MIT illustration)

The program allows drones "to be able to handle conditions such as high winds, fuel shortages and potential sensor errors," Lewis writes. "The team also figured out an efficient way for the drone to calculate all possible routes to its destination before takeoff, so it can avoid potential collisions." To do this, they used a decision tree method in which each branching point includes the probability of an outcome occurring. Drones can then make decisions such as finding the nearest charging station if they are running low on fuel. (Read more)

Some are concerned about irresponsible drone operators flying with no regard to safety. Earlier this month a tourist crashed a drone into Yellowstone National Park. Safety was also a concern Tuesday night during an NFL preseason game in Charlotte when a drone flew over the stadium during the fourth quarter, Mark Washburn reports for the Charlotte Observer. No one was injured, and the operator was detained—but released—with all information forwarded to the Federal Aviation Administration.
Written by Tim Mandell Posted at 8/27/2014 02:58:00 PM