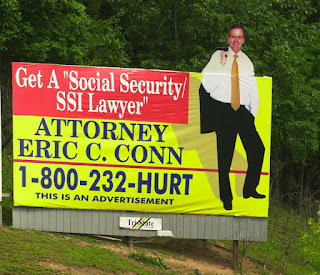 Several hundred people in Eastern Kentucky who were clients of a disability attorney featured in a "60 Minutes" investigative report on fraud could have their disability payments suspended, Bill Estep reports for the Lexington Herald-Leader. The loss of benefits will not only be significant for the individuals but also "will hurt the area because federal disability payments make up a considerable piece of the economy in some counties." (Herald-Leader photo)

Lawyer Eric Conn, who runs the third largest disability practice in the country in Stanville, Ky., was the focus of a 2013 Senate Committee on Government Affairs. The report found that virtually all of his 1,823 cases were approved by former disability judge David Daugherty, who has been investigated by the federal government. Conn's clients have been awarded $500 million in claims, and Conn collected more than $13 million in legal fees from the federal government over a six-year period. Conn also received $22.7 million from 2001 to 2013 from Social Security to represent claimants. The report said he also paid five doctors roughly $2 million to regularly sign off on bogus medical forms that had been manufactured and filled out ahead of time by Conn's staff.

"Attorneys familiar with the issue said some people who will have to go through the review process probably would not have qualified for benefits if not for the questionable evidence Conn submitted but that many would have," Estep writes. "Prestonsburg attorney Ned Pillersdorf said his information is that more than 800 suspension letters went out last week."

Pillersdorf told Estep, "To suspend these vulnerable people is unconscionable. This is almost an ambush by the Social Security Administration." Pillersdorf said lawyers are setting up an emergency meeting to discuss their next move. "One approach would be to file a lawsuit in federal court seeking to block the suspensions." (Read more)
Written by Tim Mandell Posted at 6/01/2015 03:31:00 PM