Oklahoma breaks state record for the most yearly earthquakes; linked to oil and gas operations 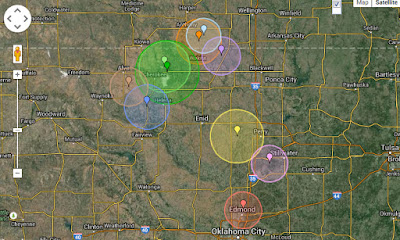 "The state has averaged 2.5 quakes a day in 2015," Soraghan writes. "If that rate continues, Oklahoma would have more than 912 quakes this year." The rate is also six times higher than California, which this year has had 90 earthquakes magnitude 3.0 or higher. Oklahoma averaged about two earthquakes per year from 1975 to 2008. Once the oil and gas boom hit the state, the number grew in 2009 to 20, then to more than 100 in 2012.

Republican Gov. Mary Fallin said state efforts to decrease earthquakes could take more than a year to take effect, Soraghan writes. "Oil and gas regulators at the Oklahoma Corporation Commission have focused on ensuring that disposal wells in quake-prone areas are not drilled so deep that they penetrate granite bedrock. Scientists say injecting into such 'basement rock' raises the risk of quakes. But recently the commission also ordered well operators in an area north of Oklahoma City to cut the volume they inject by 38 percent, back to 2012 levels." (Read more)
Written by Tim Mandell Posted at 8/20/2015 02:08:00 PM