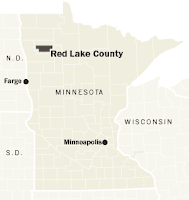 The U.S. Department of Agriculture's Natural Amenities Index, which ranked the most desirable counties to live in based on scenery and climate, has received criticism for downgrading counties for having cold, wintry winters and lacking bodies of water and varied topography. Perhaps no reporter took more heat than The Washington Post's Christopher Ingraham, who offended residents of Red Lake County, Minnesota, for pointing out that it was dead last on the list.

"As a reporter, I'm used to folks disagreeing with me, especially when covering contentious topics like guns, gay marriage and drug policy," Ingraham writes. "But until I wrote about the natural amenities index I had never been disagreed with so much. And so politely. Could it really be that bad? I had to find out. At the invite of local businessman Jason Brumwell, I took a trip up there last week to see the truth behind the numbers. I wanted to find out what life in America's worst county was really like."

"Brumwell welcomed the media attention the county's last-place ranking brought and encouraged other businesses to do the same," Ingraham writes. "My original story hadn't quite framed it this way, but some locals took it to mean that we called their county ugly. So, soon after my article went up, restaurants and bars began offering specials on 'ugly burgers' and 'ugly wings.' Officials in Red Lake Falls, the county's largest town, with a population of 1,410, floated the idea of renaming next year's Summerfest the 'Uglyfest.'" 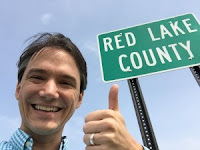 "In the course of my visit, I learned how crucial farming is to the local economy," Ingraham writes. "Agriculture directly or indirectly supports a lot of economic activity in the county. And the small-town narrative we're all used to hearing—of boom and decline, of good jobs leaving for overseas and Main Streets hollowed out by relentlessly low prices—doesn't really seem to apply here. The economic opportunity is a big reason many people stay, and some others who left eventually make their way back here." (Christopher Ingraham)

"Despite a population of only 4,000, the county supports two elementary schools and two high schools," Ingraham writes. "Each of the high schools graduates roughly two dozen students each year, and even the county's poor have a remarkably good shot of becoming middle class later in life, according to a 2013 study by Harvard University's Equality of Opportunity Project. In fact, by most economic metrics, the county looks pretty good. The unadjusted employment rate in July was 4.6 percent, well below the national average. The median household income is $48,000, while the median home value is about $89,000, according to the U.S. Census. The poverty rate is 11.9 percent, below the U.S. average of 15.4 percent."

"What I found most striking is how friendly everyone I'd met had been," Ingraham writes. "They were fiercely proud of their community in a way I'd never seen before—not even during my childhood in small-town upstate New York. . . . Over and over, the folks I spoke with told me it was that sense of community that kept them here, and that contributed to that enormous outpouring of civic pride in response to my original article." 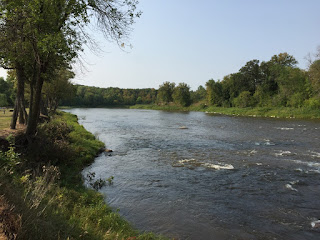 "There's perhaps something amiss in a ranking that places Red Lake County at the absolute bottom of the nation when it comes to scenery and climate," Ingraham writes. "As I noted in my original story, the USDA's index places a lot of emphasis on mild weather and a little less on true scenic beauty, which of course is harder to quantify. But there's no doubt that the Red Lake County region is flat-out gorgeous. You can see that beauty everywhere, from the open farm country to the craggy bluffs and hills of the river valley." (Ingraham photo: Red Lake River)

"When people and places halfway across the country are just a mouse-click away on your computer, it's easy to assume that the we live in a nation made small and manageable by technology," Ingraham writes. "But traveling to a place like Red Lake County, hours away from any major metro area, is a reminder that in much of the country, the rhythms of daily life are, still, markedly different than the coastal city grind of long commutes and high-octane jobs. For some of us, it takes a place as small as Red Lake County to drive home just how big this country really is." (Read more)
Written by Tim Mandell Posted at 9/03/2015 12:42:00 PM