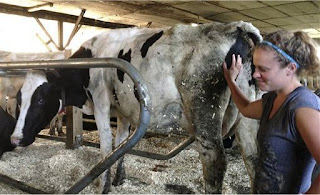 An increasing number of small dairy farms are turning to robotic milkers, which provide more reliable and efficient labor and lead to happier more productive cows, Lisa Rathke reports for The Associated Press. While robots can help small farms facing worker shortages and outdated "infrastructure that makes the operations inefficient," the downside is the high cost of converting to robots. For example, Jennifer and Jesse Lambert "took out seven-year loans for about $380,000 last year to install two robots and retrofit a barn at their organic dairy farm" in Graniteville, Vt. (Rathke photo: Dairy farmer Jennifer Lambert has two robotic milkers at her farm.)

"The cost of not automating the milking process may be greater for some farmers than shelling out hundreds of thousands of dollars, experts say," Rathke writes. "The technology supplants paying for hard-to-find and migrant labor, creates time for other farm duties and collects vital data about the animals. It boosts the number of gallons of milk being produced because cows get milked as often as they want."

"When a cow wants to be milked, it steps up into a stall, grain is dumped in front of it and an arm reaches under its body to wash the teats," Rathke writes. "A laser scans the cow’s body, and then the arm attaches a cup to each of the four teats, milking them individually. The technology also collects and stores data about each cow’s production, body temperature, weight and number of visits to the milking system." Illinois farmers Ron Lawfer said his cows "have produced about 20 percent more milk since two robots were installed in December 2014." Lawfer, who spent $400,000 on robots, said he figures if his family hadn’t built a new $2 million facility they would be out of business by now.

Not everyone sees robots as the answer, Rathke writes. Larry Tranel, a dairy specialist with the Iowa State University Extension, told her, “It’s a technology that it’s kind of scale-neutral in a sense because every robot can handle about 60 cows, and when you start going larger than that people, figure out pretty quick that it’s probably cheaper to hire the labor and put in a big parlor.” (Read more)
Written by Tim Mandell Posted at 9/28/2015 01:36:00 PM