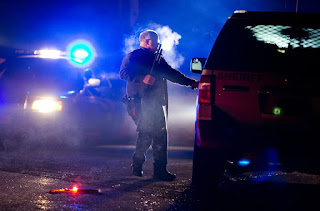 Oregon's Justice Department "has opened a criminal investigation into Grant County Sheriff Glenn Palmer, who met with militants from the (Malheur National Wildlife Refuge) takeover in eastern Oregon and urged authorities to concede to some of their demands," Lez Zaitz reports for The Oregonian. "The investigation will be handled by the Criminal Justice Division in Attorney General Ellen Rosenblum's office. The division investigates public corruption as part of its duties." Palmer is not the same sheriff who was featured in many stories as trying to broker a peace agreement between the two parties. That was Harney County sheriff Dave Ward. (Oregonian photo: Grant County Sheriff Glenn Palmer as a roadblock during the standoff)

During the standoff, Palmer "told the local Blue Mountain Eagle newspaper he considered the occupiers to be 'patriots,'" Zaitz writes. He said the takeover would be resolved if authorities met some of the demands of the occupiers, including freeing two jailed ranchers. He was also scheduled to speak at the community meeting that occupiers were traveling to when they were apprehended. Palmer said the event, which led to police killing one of the occupiers, was an "ambush." Last weekend standoff leader Ammon Bundy "released a statement defending the sheriff, encouraging people to 'stand with Sheriff Palmer' in the face of the state licensing agency's actions."

"Nine complaints filed with state regulators all cite Palmer's involvement with the armed militants," Ziatz writes. John Day Police Chief Richard Gray filed one of the complaints, writing, "I have a great public safety concern when the Grant County sheriff is allowed to openly meet with and be part of this group of lawbreakers." Valerie Luttrell, manager of the John Day dispatch center that serves local agencies, including the sheriff's office, wrote that "Palmer was judged a 'security leak' by local police, state troopers and the FBI. She said Palmer promotes his personal agenda 'over the welfare and safety of the general public he is sworn to protect.' The remaining complaints were filed confidentially as allowed by law."
Written by Tim Mandell Posted at 3/18/2016 03:42:00 PM