Survey: 34% of rural Minnesota grocery store owners expect to no longer own store in five years 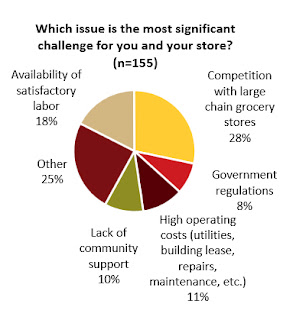 More than 90 percent of grocers indicated that competition with large chain grocery stores (97 percent), high operating costs (95 percent), and narrow profit margins (94 percent) are major or minor challenges, and 29 percent cited competition with large chain grocers as the most significant challenge they face. A total of 84 percent of respondents said they own the building where the store is owned, with 36 percent saying they have owned the store for more than 20 years, 27 percent for 11 to 20 years, 12 percent from six to 10 years and 25 percent for five or fewer years.

Other major economic challenges "include high operating costs and narrow profit margins," reports the Brainerd Dispatch. "The majority of survey respondents have stores housed in older buildings, which can often require more upkeep. More than 44 percent of grocery stores operate in buildings 16 to 50 years old." Kathryn Draeger, the statewide director of the University of Minnesota RSDP, told the Dispatch, “With aging buildings and thin profit margins, I'm concerned that we will see a continuation and worsening of our loss of small town grocery stores."
Written by Tim Mandell Posted at 3/15/2016 12:39:00 PM