Another slip of the tongue leaves Clinton facing backlash, this time from coal industry, Appalachia 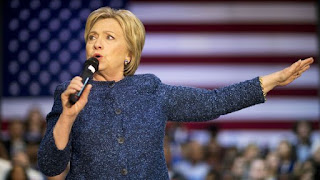 While Republicans and the coal industry have been quick to jump on Democratic presidential candidate Hillary Clinton for telling CNN on Sunday, "We're going to put a lot of coal miners and coal companies out of business," the Clinton campaign says the quote was taken out context and purposely twisted to make her look anti-coal, Dan Merica reports for CNN. Brian Fallon, Clinton's press secretary, told Merica, "Obviously she was making the exact opposite point: that we have to take proactive steps to make sure coal workers, their families and their communities get not just the benefits they've earned but also the future they deserve." (AP photo by David Goldman)

Clinton told CNN that the Obama administration’s Clean Power Plan was going to "put a lot of coal miners and coal companies out of business" and that she was going to "make clear that we don't want to forget these people," Merica writes. She then "touted her plan to spend federal dollars on rebuilding coal country." Senate Majority Leader Mitch McConnell and Sen. Rand Paul, both Republicans from Kentucky, immediately accused Clinton of joining Obama's "war on coal" and not caring about the struggles of people in poverty-stricken Appalachia.

Clinton tried to make amends Monday, saying, "I'm the only candidate which has a policy about how to bring economic opportunity, using clean renewable energy as the key, into coal country. Because we're going to put a lot of coal miners and coal companies out of business. We're going to make it clear that we don't want to forget those people," Adam Beam and Jonathan Mattise report for The Associated Press.

AP writes, "Clinton has been dogged by a series of slip-ups in recent days. On Friday, she outraged LGBT and HIV/AIDS activists when she attributed early efforts to combat the disease to former First Lady Nancy Reagan. A day later, she prompted swift blowback from Sanders' team when she said she didn't know 'where he was' when she was trying to get a health care overhaul through Congress in 1993. His team produced a photo of Sanders standing right behind her at an event promoting the plan and a hand-written note from Clinton thanking him for his work on the issue."
Written by Tim Mandell Posted at 3/15/2016 12:39:00 PM