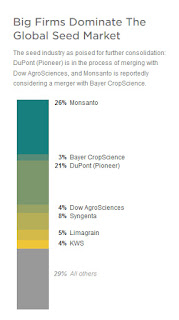 The seed industry, which once consisted of hundreds of family-run businesses, could soon be dominated by three major companies, Dan Charles reports for NPR. "A new round of industry consolidation is now underway. Multibillion-dollar mergers are in progress, or under discussion, that could put more than half of global seed sales in the hands of three companies." (NPR graphic)

The groundwork for the corporate domination began in the 1990s when "chemical companies like Monsanto found a way to genetically engineer crops," Charles writes. "They inserted new genes into corn and soybeans, giving plants the power to kill insects or survive weedkillers, and farmers wanted those genes. Traditional seed companies, if they wanted to stay competitive, had to license those genes from their inventors. Many worried about being cut off from this new technology. In 1998, Monsanto and other biotech companies started trying to buy some of the biggest seed companies outright. It gave them more control over an increasingly lucrative business."

Sygenta, which is headquartered in Switzerland, "has struck a deal to be acquired by Chem China, a state-owned enterprise. Meanwhile, other seed and pesticide companies are getting bigger, too. DuPont and Dow are merging. There are reports that Monsanto is in talks to buy either Bayer or BASF. If the deals go through, it's estimated that three of these companies will control more than half of global seed sales." (Read more)
Written by Tim Mandell Posted at 4/07/2016 11:51:00 AM