The number of counties that the Department of Agriculture considers "farming dependent" has dropped to 444 from 511 a decade ago, a drop of 13 percent, while the count of mining-dependent counties grew 60 percent, from 130 to 219, thanks mainly to horizontal hydraulic fracturing for oil and gas, according to Amber Waves, a publication of USDA's Economic Research Service. The ones that dropped off the farm-dependent list are shown in brown on this map; those where farming became more important are in blue, and the other farming-dependent counties are in green. 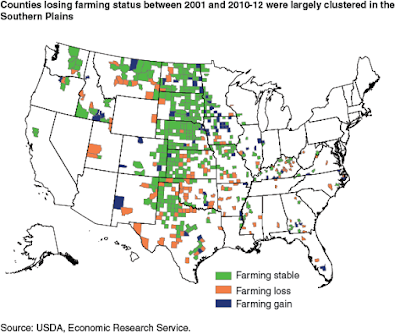 "Farm consolidation, increasing productivity, and labor-saving technology has led to a significant decline in farm employment," ERS's Timothy Parker wrote. "Nationally, the number of farm jobs fell by 14.1 percent between 2001 and 2013. During the same period, total farm earnings increased 63.4 percent (in real terms), according to data from the Bureau of Economic Analysis. Farming dependence has become more concentrated in Midwestern counties, while farm dependence has dropped more sharply elsewhere.

The recent drop in oil prices may have reduced the number of counties dependent on mining. This map shows in colors the counties that were judged to be dependent on farming, mining, recreation, manufacturing and government in 2012. Click on either map for a larger version of each image; for more detail, save the image and enlarge it. 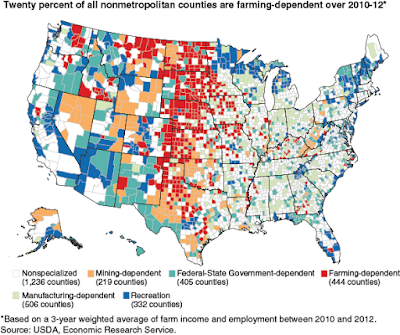