Sherrod says she will sue blogger Breitbart; still not sure about returning to Department of Agriculture 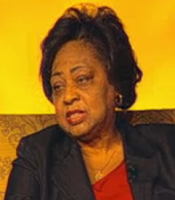 Shirley Sherrod told the National Association of Black Journalists this morning that she will sue conservative blogger Andrew Breitbart for posting a misleading video that was picked up by some news organizations, causing her ouster as head of the Rural Development program in Georgia for the Department of Agriculture. "He had to know that he was targeting me," Sherrod said in a discussion with three NABJ members. "I will definitely sue." (NABJ video)

The Obama administration has apologized for demanding Sherrod's resignation before knowing the full contents of her speech at an NAACP meeting, and has offered her a top civil-rights job in the Agriculture Department, or her old job back. She said she is far from deciding what to do, and noted that the written offer for the new job "says 'draft.' I need to ask them, what does that mean?" She also said she isn't sure the unit she would head even has a budget. But later she said she is very concerned about the declining number of black farmers, and wants to talk with Agriculture Secretary Tom Vilsack, who she said needs more African Americans around him. "If he's truly interested in dealing with discrimination in his agency, then there are a lot of things that need to happen," she said. "I don't know if it can be done within the department." In reponse to a question from the audience, Sherrod said she has not heard from Cheryl Cook, the deputy undersecretary who demanded her resignation, but would like to. "There are quite a few issues I would like to talk to her about," she said. Cook, who is from Pennsylvania, is white.

In response to questions from the panel, Sherrod said President Obama needs a lesson in the history of the civil rights movement, in which she and her husband were involved. She noted that she has invited him to visit her native Southern Georgia. "I need to have him down there so I can take him around and show him some of that history," she said. Near the beginning of the session panelist Don Lemon of CNN played video of his story on what he called "a picture of racial unity," Sherrod's reunion with the elderly white farmers whose farm she helped save, after first not making a full effort at a nonprofit where she worked 24 years ago.

Sherrod said she will continue to refuse interviews with Fox News "because they had their chance to get the truth out, and they're not interested in the truth." Fox did not air the video until Sherrod's resignation had been announced, but it did run a story on its website about an hour before the announcement. "There was a breakdown in the system," Michael Clemente, Fox's senior vice president of news, told Keach Hagey of Politico yesterday. (Read more)
Written by Al Cross Posted at 7/29/2010 11:30:00 AM