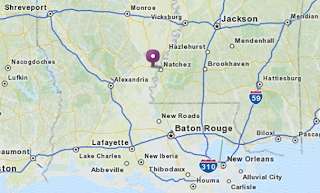 Three people told Nelson that Spencer was part of a Ku Klux Klan hit squad assigned to ride into Ferriday to burn Morris' shoe shop during the early morning hours of Dec. 10, 1964, writes Nelson. Morris lived four days after the fire. "Only the bottom of his feet weren't burned," the Rev. Robert Lee Jr. of Clayton, age 96, who visited Morris in the hospital, told Nelson. "He was horrible to look at." During the four days he was hospitalized, Morris was interviewed by the FBI, Ferriday police and fire department officials. A number of friends who visited Morris in the hospital prior to his death were convinced Morris knew his killers. They said he called them "two white friends."

Leonard Spencer, 71, told reporter Nelson that he did not know anything about the crime and denied he participated in it. Spencer said he made the same denial to two FBI agents about 30 to 40 days ago. His son, William "Boo" Spencer, said Leonard Spencer and other men were surprised to find Morris in his shop that morning. "My dad said they could hear a stirring in the place, then a man came out," said Boo Spencer, 41. Boo Spencer said his father told him the man in the shop, Morris, "was doused with gasoline and started to run." Leonard Spencer's former brother-in-law, Bill Frasier, told Nelson that Spencer confessed to arson and claimed Morris' death was unintentional. The third person to tell a similar version of events was Leonard Spencer's ex-wife, Brenda Rhodes.

Transcripts of recorded FBI interviews with Morris when he was hospitalized following the arson, which the Sentinel obtained through the Freedom of Information Act, indicated Morris never told authorities he knew the men who set his shop on fire. In a morphine-induced consciousness, on at least 12 occasions during those interviews, Morris denied knowing who the men were. The FBI investigated the murder twice in the 1960s, and a third time in 2007. (Read more) (Index of stories on investigation)

Kim Severson, writing for the Times, writes that Rosa Williams, granddaughter of Frank Morris, "moved Mr. Nelson to dedicate himself to this and the other cold cases. ... From that moment on, Mr. Nelson has reported on little else," writes Severson. He was motivated by the curiosity of a newsman. Nelson, 55, told Severson: "What kind of human being could set another man on fire? ... I was just curious about something that happened in our community that I never knew about. I just wanted to find out who did it." (Read more)
Written by Lu-Ann Farrar Posted at 1/13/2011 04:17:00 PM