The Oklahoma Senate last week passed a bill that would prevent cities and counties from banning fracking and prohibit local bans on wastewater disposal, reports The Associated Press. The bill, which passed by a 33-13 vote, now goes to the desk of Republican Gov. Mary Fallin, who has repeatedly said she believes the surge in the state's earthquakes is not related to oil and gas activity, despite several contradictory studies from scientists.

The Oklahoma Geological Survey, the state agency in charge of determining the cause of Oklahoma's rise in earthquakes, released a statement last month that said it was very likely that the majority of recent earthquakes are triggered by the injection of produced water in disposal wells, Mike Soraghan reports for EnergyWire.

Oklahoma led the lower 48 states in earthquakes last year with 585 of magnitude of 3 or higher and is on pace to have 800 this year, Soraghan writes. The state, which only averaged one to three earthquakes per year before 2009—when the oil and gas boom took off—is now averaging 2.5 earthquakes each day. (Read more) (The Nation graphic) 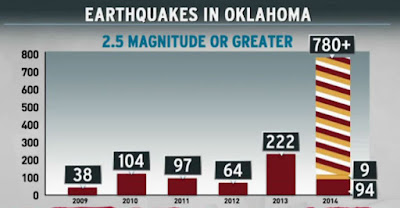