There's no place like home for Minnie Pearl since a bronze statue of the Hickman County, Tennessee, native and country-music comedienne has been moved from its original location on the courthouse square in Centerville.

In 2005, Centerville resident Rod Harris spearheaded and helped pay for the 900-pound bronze statue of the icon with the help of an anonymous donor. But the donation came with a caveat: It was not to be moved from its spot in front of the courthouse's eastern entrance without Harris' permission -- a problem for officials trying to implement a $700,000 downtown renovation, since Minnie's location interfered with traffic. But Harris disagrees. "That particular position was the very best position," he told The Tennessean. "Minnie Pearl should be center stage, or she won't be there." 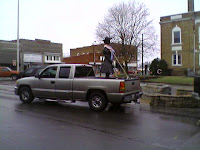 The dispute reached new levels over the weekend when Harris took matters into his own hands and hauled Minnie Pearl away in his truck. (Photo from the Hickman County Times, which is not online.) Now, folks in the county are wondering if and when Minnie will return, while Harris continues negotiations with the town 50 miles west of Nashville. "I'm right in what I done," he told The Tennessean's Clay Carey. "I had an agreement that was ignored."

The character of Minnie was created "in the late 1930s by Sarah Ophelia Colley [later Cannon], a Centerville native who studied drama at the exclusive Ward-Belmont finishing school in Nashville," Carey notes. "As Minnie Pearl, she became the first female member of the Grand Ole Opry in 1940, joined the cast of the long-running cornpone TV show Hee Haw in 1969, and was elected to the Country Music Hall of Fame in 1975." (Read more)
Written by Aubrey Krekeler Posted at 3/06/2009 11:45:00 AM