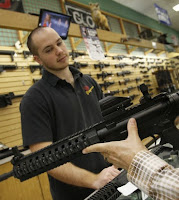 Gun and ammunition sales spiked after President Obama's election this month because of fears that he might enact stricter gun controls in his second term or that United Nations agreements about gun control might infringe on the U.S. market, reports Anna Tinsley of the Fort Worth Star-Telegram. If this pace continues, gun and ammo shortages could occur, dealers say. (Star-Telegram photo by Rodger Mallison: Clerk tries to sell an assault rifle)

Gun-control advocates say they don't understand the rush to stockpile. Obama has never said he would infringe on the right to bear arms, saying that he respected that right. But gun-owners' fears seems to stem from propaganda campaigns by the National Rifle Association and Obama's statements about wanting to restore the ban on assault weapons. After the 2008 election, people bought so many guns and ammo that a shortage ensued. It took more than a year for prices to drop and supplies to build back up. Sales after this year's election were not as high as four years ago, Tinsley reports.

Gun-buyers say they think Obama didn't push for stricter rules in his first term so he would get re-elected, and now that he has been, they fear increased regulations are on the horizon. Cheaper Than Dirt Outdoor Adventures owner DeWayne Irwin told Tinsley the buying frenzy will "die down" in the next six to eight months, but "Something will happen, maybe talk of an assault rifle ban, and it will all come up again," and when it does, sales will surpass 2008 numbers. (Read more)

UPDATE, Nov. 27: For the second year, gun buyers came out in record numbers on Black Friday, overloading the FBI with required background checks, Kevin Johnson of USA Today reports. The agency fielded 154,873 calls for checks, a 20 percent increase from last year's previous record of 129,166, according to FBI records.
Written by Ivy Brashear Posted at 11/26/2012 01:09:00 PM

Barack Obama won by a small difference of individual votes. This demonstrates dissatisfaction with his rule of almost half of the American people. I'm hoping, however, for Obama to take the reins of the economy, because U.S. growth produces positive effects in Brazil and much of the world.