Grass-fed beef gains popularity, but it takes twice as much time as finishing cattle on feedlots 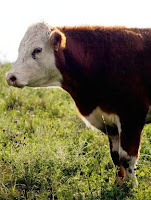 The demand for grass-fed beef is growing, and is expected to continue growing at a relatively fast pace, perhaps 20 percent per year, according to one study. Alan Williams, a grass-fed beef producer and member of the Pasture Project, an effort to get more conventional Midwest producers to join in, tells Georgina Gustin of the St. Louis Post-Dispatch, "In the late 1990s there were only 100 producers. Now there are more than 2,000. The market has grown from being $2 million to $3 million to over $2.5 billion in retail value."(Photo by J.B. Forbes of McClatchy-Tribune)

Most U.S. cattle are sent to feedlots where they are fattened and finished with corn and other grains, Gustin reports. That system allows the beef industry to run cheaply and efficiently with fewer workers, and ranchers say even a partial switch to a pasture-based system, in which cattle are left to graze until slaughter, would be costly and impractical. Grass-fed advocates say the feedlot system and growth of the industry "has come at too high a cost for the environment, for human health and for the animals themselves," Gustin reports.

"Basically, it comes down to time," said American Grassfed Association president Patricia Whisnant, who also owns Rain Crow Ranch, one of the largest producers of grass-fed beef. "You take an animal off of the pasture, you give him antibiotics and corn, you're looking at harvesting that animal in 12 to 14 months. On grass, you're looking at 24 months, and more likely 28." (Read more)
Written by Ivy Brashear Posted at 11/26/2012 10:54:00 AM