USDA to start its quintennial Census of Agriculture Dec. 18; tells small farmers that their input matters 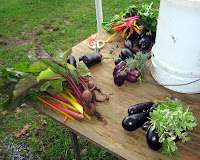 Starting Dec. 18, the U.S. Department of Agriculture will be conducting its Census of Agriculture, which every five years provides a comprehensive snapshot of farming nationwide, down to the county level. Three million surveys will be mailed. But, reports Grant Gerlock of Harvest Public Media, small farms are often underrepresented in the census because they choose not to return the survey. This, he writes, does an injustice to all farmers because "census numbers help direct the flow of funding out of Washington and inform policy decisions on things like the Farm Bill and disaster relief."

Dean Groskurth, director of the Nebraska field office of the National Agricultural Statistical Service, said USDA is always in contact with those who farm commodity crops like corn, cattle, hogs and wheat, but what they don't know so much about is specialty crops. He said now is the time for small farmers to give information to the government so good decisions can be made about helping them or others like them. The census counts as a farm any place that has the potential to sell more than $1,000 of agricultural products, whether it's urban or rural, one acre or a thousand. Results of the survey should be available in early 2014. (Read more)
Written by Amy Wilson Posted at 11/30/2012 02:11:00 PM