The Obama administration Wednesday unveiled a $50 million plan to keep invasive Asian carp out of the Great Lakes. "Several researchers reacted with skepticism, as it doesn’t include what they said is most needed — separating the lakes from the Mississippi River," Keith Matheny and Todd Spangler report for the Detroit Free Press. "A study looking at other control methods, including permanent separation of Chicago-area waterways from Lake Michigan, is slated for completion later this year." (Associated Press photo)

Jim Diana, director of Michigan Sea Grant, a Great Lakes research organization, and professor of fisheries and aquaculture at the University of Michigan, told the Free Press, “I think we could take carp control more seriously by disconnecting the Chicago waterway. In absence of that, we’ll have all these kinds of temporary solutions that might work.” But the waterway carries 10.5 millions tons of cargo a year, so eliminating it would be politically difficult, Matheny and Spangler note. (Free Press graphic; click on it for larger version) 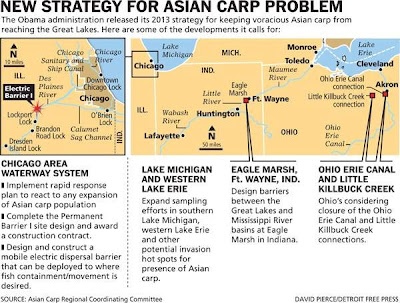 On the other hand, scientists say that if the carp get into the Great Lakes, they could severely damage the region's $7-billion fishing industry. The new plan, drawn up by the Asian Carp Regional Coordinating Committee, includes "an improved electric barrier in the Chicago area, creating barriers at other tributaries to the Great Lakes and testing new tools such as water guns and netting, chemical controls and pheromone attractants," Matheny and Spangler report.

Duane Chapman, lead Asian-carp researcher for the U.S. Geological Survey, told the Free Press that electric barriers are working, but as more carp get closer to the Chicago-area barrier, it will increase the likelihood of smaller carp slipping through to Lake Michigan. Officials said they are planning "to design a mobile electric dispersal barrier that can be deployed in Chicago-area waterways in an emergency situation, continue work on another permanent electric barrier in the region, and develop and field test tools like water guns, netting, selective toxins and other control measures."

"The framework also calls for continued research on use of water cannons — concussive devices set off underwater to kill or deter fish — and how to best utilize them," Matheny and Spangler report. "And directed toxins are in development that could be placed in microparticles and matched with Asian carp digestive enzymes so that they are poisoned when ingesting the toxin, but it passes through other fish species." (Read more)
Written by Tim Mandell Posted at 7/25/2013 11:59:00 AM