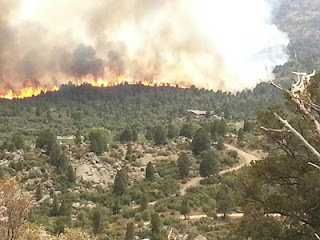 That's how Patrick Whitehurst of The Daily Courier in Prescott, Ariz., began his story about the horrific casualties from a wildfire that killed 19 of the 20 firefighters in a special unit of the city fire department yesterday. (Prescott Fire Dept. photo)

The Granite Mountain Hotshots are the only widlfire-fighting team in the U.S. "organized through a city fire department," Whitehurst reports. "It earned its national inter-agency hotshot designation in 2008. Prescott Fire Department Fire Chief Dan Fraijo said the 20th crew member was working in a different location on the fire and was not injured."

"Sunday's fatalities amounted to the highest firefighter death toll on a single U.S. wildfire since 1933, when 25 firefighters were killed on the Griffith Park fire in Los Angeles," Whitehurst reports. At the bottom of his story are links to other coverage by the Daily Courier, and many reader comments.
Written by Al Cross Posted at 7/01/2013 12:12:00 PM