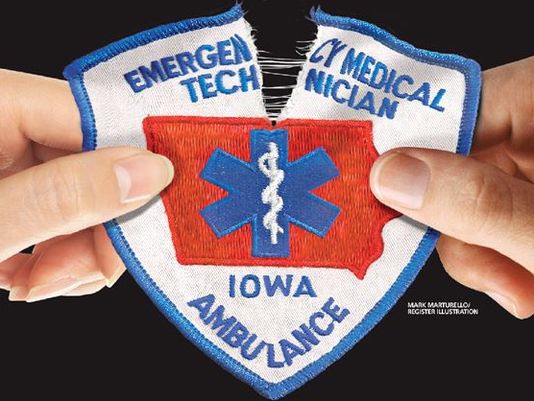 Iowa has a lot going for it, with some of the world's richest soil and the nation's highest literacy rate, but it lags much of the nation in emergency medical services. And its problems reflect those in many rural areas around the nation.

"Part of the problem in Iowa is that EMS is not a mandated service," Clark Kauffman reports for The Des Moines Register. "Cities and counties are under no obligation to provide or help fund ambulance service, causing many to heavily rely on a mix of donations and the fees billed to patients. But those fees are largely determined by Medicare, Medicaid and commercial insurers." (Register photo illustration by Mark Marturello)

That means 29 of the state's counties, with more than 426,000 residents, have only one full-time ambulance, or none at all, Kauffman writes. Even though the state's population grew from 2005 to 2013 the number of EM services dropped from 891 to 781. Fourteen counties have four of fewer EM services. "At least 11 state-licensed EMS 'agencies' consist of single individuals working out of their home and car—with no other EMTs to accompany them on emergency calls that might involve more than one patient," Kauffman reports.

"Nine years ago, the [EMS] bureau not only knew which areas of the state were underserved, it had established written goals to pursue funding opportunities to provide education in underserved areas," Kauffman reports. "Today, the agency no longer defines an 'underserved' area, nor does it specifically track or analyze data about the services that have been forced to shut down, merge or scale back their hours of coverage due to volunteer shortages or other problems.. The bureau hasn't had a full-time chief in three years, and Iowa is one of only 13 states without an EMS medical director—a position that's been vacant for 11 years here. Since 2002, the bureau's staff has dropped from 17 positions to 10. (Read more)
Written by Tim Mandell Posted at 7/15/2014 02:11:00 PM