Colo. governor vows to do 'whatever it takes' to beat anti-fracking initiatives if they reach ballot 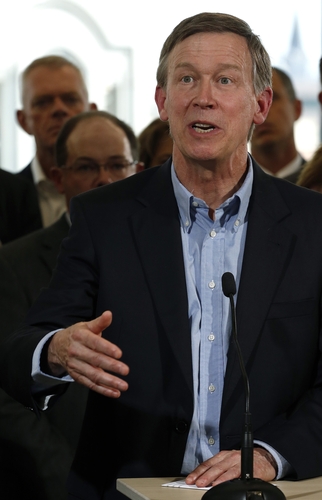 Colorado Gov. John Hickenlooper said Thursday that he will "do 'whatever it takes' to ensure the defeat of the two ballot initiatives that aim to give local governments more control over oil and gas drilling," Jennifer Yachnin reports for EnergyWire. (AP photo by Brennan Linsley: Hickenlooper speaking Thursday)

On Wednesday Hickenlooper announced that he didn't have enough support from state lawmakers to pass a compromise law that would give localities more control over hydraulic fracturing, which would send the issue to the ballot box, as long as proponents of the initiatives get the required number of signatures by Aug. 4. As of Wednesday the proposals still needed about 40,000 signatures.

Hickenlooper, who is facing stiff competition in his re-election bid, said, "With November's elections fast approaching, we all agree we now must turn our full attention to defeating these ballot measures. These measures risk literally thousands and thousands of jobs, billions of dollars in investment and hundreds of millions of dollars in state and local tax revenue," Yachnin writes.

Hickenlooper said that if towns are able to ban hydraulic fracturing, it could cost the state around 2,000 jobs, reports Ivan Moreno for the The Associated Press. But while the oil and gas industry said the measures could lead to fracking being banned, supporters of the measure disagree. Mara Sheldon, a spokeswoman for Coloradans for Safe and Clean Energy, the group behind the initiatives Hickenlooper is opposing, told Moreno, "These initiatives are not a ban on fracking; they are the right balance needed for responsible energy development. It simply doesn't belong where we live, where our food grows and where our children play." (Read more)
Written by Tim Mandell Posted at 7/18/2014 11:53:00 AM