Last month was the hottest August ever; global temperature slightly higher than in recent years

Last month was the hottest August ever, and through the first eight months of the year 2014 is the fourth hottest year since the first records kept in 1880, NASA's Goddard Institute for Space Studies reported on Monday. Although it was the warmest month ever globally, the August temperature was only slightly higher that in previous years, Terrell Johnson reports for The Weather Channel.

"Last month was the top-ranked August, with an anomaly of 0.70ºC above the 1951-1990 baseline temperature average," Johnson writes. "The difference, however, is very small compared with previous Augusts, said NASA-GISS Director Dr. Gavin Schmidt in an email interview with weather.com, adding that August 2014 'is basically in a statistical tie' with 2011, 2008, 2006 and 2003." (Read more) (NASA map) 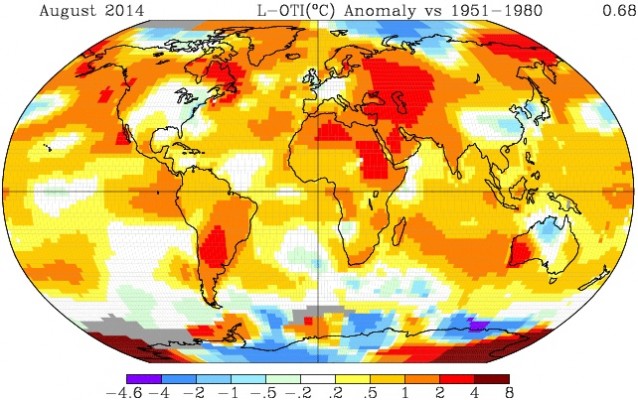