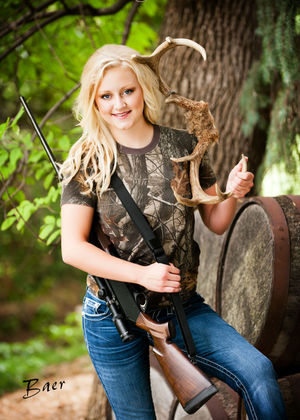 Seniors at a rural high school in central Nebraska can now pose for yearbook portraits with their firearms. The school board for Broken Bow Public Schools unanimously passed the rule Monday night, allowing senior portraits to contain guns, as long as the photos are done tastefully, Joe Dejka reports for the Omaha World-Herald. One official said posing with guns is nothing new, with about half the state's districts allowing such photos. (Baer Photography: Senior portrait of Jillian Dixon of Northwest High School in Grand Island, Neb.)

Hunting, skeet and trap are popular in Broken Bow, and firearms are common, said Superintendent Mark Sievering, Dejka writes. Sievering told him, “The board, I believe, felt they wanted to give students who are involved in those kinds of things the opportunity to take a senior picture with their hobby, with their sport, just like anybody with any other hobby or sport." (Wikipedia map: Custer County, site of Broken Bow)

The new policy says "that students may pose with objects that illustrate their accomplishments or interests, including hunting, shooting and other outdoor sporting activities," Dejka writes. "If posing with an item normally considered a weapon, such as a rifle, shotgun or knife, the student may not be brandishing the weapon or pointing it at the camera. The display must be 'tasteful and appropriate.' For example, the policy says, a student 'should not submit a photograph of game shot by the student if the animal is in obvious distress.'"

School board member Matthew Haumont told Dejka, “So we’re going to have to take these as a case-by-case basis. But I think that goes with any photo, whether it’s a scantily clad girl or something like that.” (Read more)
Written by Tim Mandell Posted at 10/23/2014 03:21:00 PM