While some rural Iowa school districts are facing population losses, struggling to remain open and being forced to cut costs and programs, the state's urban districts are flourishing and expanding, and their biggest problem is having too many students and needing more and bigger schools, Michael Barbaro reports for The New York Times. The effects are also changing the political climate in the state. 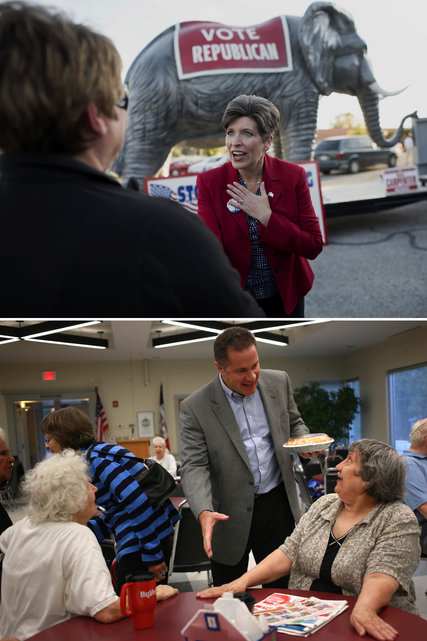 From 2003 to 2013 the state's metro areas grew by 13.3 percent, while population in all other areas fell by 3.6 percent, said a study by Iowa State University, Barbaro writes. "Iowa, the quintessence of heartland America, is undergoing an economic transformation that is challenging its rural character—and, inevitably, its political order."

"As Iowans prepare to elect a new United States senator for the first time in three decades (Democratic Sen. Tom Harkin is retiring after being in office since 1985), the scale at which people and power have shifted from its rural towns to its urban areas is emerging as a potent but unpredictable undercurrent in the excruciatingly close race, offering opportunity and risk for both sides," Barbaro writes. (Republican Joni Ernst (Bloomberg photo by Daniel Acker) is concentrating more on rural voters, while Democrat Bruce Braley (NYT photo by Luke Sharrett) is going after the urban vote in the Iowa Senate race)

In Pocahontas County, in corn country in the northern part of the state, school enrollment has dropped by 32 percent over the past decade, forcing schools to consolidate and slash sports programs, ending years of tradition and rivalries, Barbaro writes. "Two hours south, Dallas County faces a very different problem: It is running out of schools. With the population swelling, in what used to be farmland ringing Des Moines, enrollment in its largest district has doubled over the same 10 years. As soon as a gleaming new high school is completed, construction on another begins."


"The state’s once ubiquitous farms are supporting fewer workers, the towns built around them are hemorrhaging younger residents and a way of life eroding for decades is approaching a denouement," Barbaro writes. "Farm fields are yielding to the new headquarters of banks, insurance companies and health care providers, whose rapid expansion is luring waves of Iowans to cities and suburbs and contributing to the state’s enviable 4.5 percent unemployment rate."

"Those changes have turned Iowa’s older, Republican precincts even redder and its younger, Democratic districts even bluer, while giving rise to suburbs whose politics can be harder to categorize—a mixture of millennial generation religious conservatives, baby boomer libertarians and Generation X liberals," Barbaro writes. And the candidates for Harkin's seat have chosen different paths in enlisting votes, with Republican Joni Ernst appealing to conservative rural voters and Democrat Bruce Braley embracing a more urban-friendly agenda.

Harkin "said the election would turn on which candidate acknowledged the new landscape," Barbaro writes. Harkin told him “There is this ideal of Iowa." Those who have left its farmlands “aren’t too far removed from those small towns.” (Read more)
Written by Tim Mandell Posted at 10/21/2014 03:52:00 PM