Rural electric cooperatives, which are more dependent on coal than other types of utilities, are raising fresh concerns as the Obama administration issues its revised, final regulations to reduce carbon dioxide and other greenhouse-gas emissions.

“We’re telling our story to everybody, everyplace, everywhere in hope that someone listens so we’ve done everything we can to protect our members,” said Jim Compton, CEO and general manager of South Mississippi Electric Power, told Cathy Cash, a writer for the National Rural Electric Cooperative Association.

Rural electric generators say the regulations would force them to close plants for which they have received billions in federal loans for upgrades to meet previous environmental regulations. “We need to find solutions to help the government and electric cooperatives traverse these regulations so we can get to the financial end of these plants,” said Tony Campbell, president and CEO of East Kentucky Power Cooperative. “If we don’t, it’s going to cost the federal government money and the consumer-members money.”

But one of those consumer-members, Tona Barkley of Owenton, said through Kentuckians for the Commonwealth: “I volunteered and worked hard on an initiative with Owen Electric and other rural electric cooperative utilities to increase clean renewable energy and energy savings. That experience gave me hope that we can all work together to bring about a bright future in Kentucky. I believe the Clean Power Plan rule gives us another great opportunity to move forward quickly.”

The revised rules call for a 32 percent reduction in greenhouse gases by 2030, instead of the original 30 percent, but give states "more time and broader options to comply" with state-by-state limits still to be set by the Environmental Protection Agency, notes Josh Lederman of The Associated Press. The plan relies more on renewable energy sources, calling for them to provide 28 percent of U.S. power by 2030, up from 22 percent in the first plan, and keeps natural gas's share of electricity generation at current levels rather than increasing it.

What are the sources of our electric power? The Washington Post has a map showing the nation's electric generating stations, by size range and power source (coal is gray, gas is orange, hydroelectric is blue, wind is green, solar is gold, oil is red and nuclear is purple). Click on the image or here for a larger version. 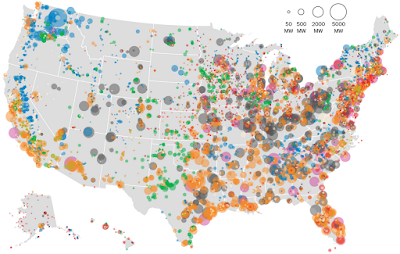