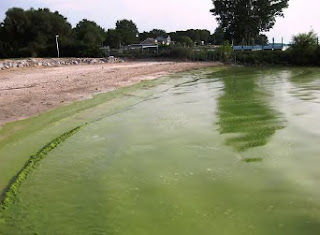 Federal agencies and farmers are working hard to prevent an algae growth disaster like the one that occurred at this time last year in Lake Erie that caused the city of Toledo to lose its drinking water for two days, reports Agri-Pulse. The Environmental Protection Agency "has teamed up with three federal agencies to improve monitoring of algal bloom growth," and the U.S. Department of Agriculture "has granted hundreds of millions of dollars to conservation initiatives across Michigan, Ohio and Indiana. Additionally, farm organizations within the Western Lake Erie Basin have worked tirelessly to prevent nutrients from leaving farms and feeding blooms." (NOAA photo: Algae coats the surface and gathers along the coastline of western Lake Erie each summer)

"City of Toledo officials confirmed last week that microcystin, a toxin produced by cyanobacteria present in some algal blooms, was detected in a Lake Erie intake crib three miles away from the city," reports Agri-Pulse. "This year’s bloom is shaping up to be similar in size to last year’s—National Oceanic Atmospheric Administration expects it to peak in September and measure an '8.7' on its severity scale, a number notably higher than 2014’s 6.5 rating and unnervingly close to 2011’s index high of 10. Fortunately, most stakeholders say that the city is better positioned to manage the bloom this year."

"To start, new sensors at an intake crib are operating 24 hours a day and taking measurements every 10 minutes," Agiri-Pulse reports. "Water samples will be taken at the treatment plant, and up to four times the amount of chemicals used last year will be ready for deployment when needed. The city will also have access to an early warning detection system developed by EPA, NASA, NOAA and the U.S. Geological Survey that will help water quality managers spot cyanobacteria algal blooms with satellite imagery. The partner agencies intend to develop a mobile app that can be utilized by water quality managers on the ground, allowing for more frequent observations over more areas than in the past."

Carrie Vollmer-Sanders, director of the Western Lake Erie Basin Project at The Nature Conservancy, said, “'In the next three years, I want to see us reversing the trend' in algal bloom size," Agri-Pulse reports. She said "if ag conservation initiatives like Lake Erie’s continue to grow in strength and breadth, 'I think we’ve won, we’ve been able to turn the tides, and we’ll be able to—whatever weather patterns we have—we’ll be able to attack any natural resources issue.'” Agri-Pulse is subscription-only but offers a four-week free trial.
Written by Tim Mandell Posted at 8/05/2015 01:22:00 PM