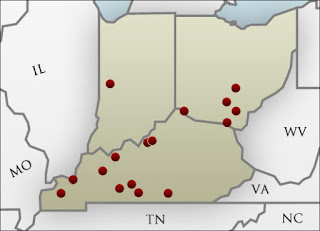 Daymar College, a for-profit college accused in a 2011 suit by Kentucky Attorney General Jack Conway of coercing as many as 5,000 students into buying overpriced textbooks and misleading students about transferring credits, financial aid and job placement opportunities, "has agreed to pay $1.2 million to ex-students, according to a copy of the tentative deal," Andrew Wolfson reports for The Courier-Journal in Louisville. Daymar, which once had nine campuses in Kentucky and now has four, has a large rural enrollment. (West Kentucky Journal map: Daymar campuses in 2010)

"The proposed settlement would provide only a small portion of the $30,000 or more in federal loans many students incurred before at least some of them ended up working in fast-food restaurants and other low-wage jobs," Wolfson writes. "The agreement calls for Daymar to pay $1.4 million to Kentucky Attorney General Jack Conway’s office, which would keep $200,000 in attorney’s fees and money to pay a claims administrator. Students who attended Daymar in the five years ending July 27, 2011 would split the rest; the amount for each would depend on how many join the settlement and how many terms they were enrolled."

"Daymar would be required to inform prospective students about the graduation rate for programs, their median debt and their default rate on loans," Wolfson writes. "The company also would be required to tell them in a 'Know Before You Go' pamphlet that 'it is unlikely that any credit earned at Daymar will be accepted at any other institution.'"

"Daymar would be allowed to tell students about prospective jobs in the field only if the figures it used could be substantiated by government data for the areas where the campus is located," Wolfson writes. "It would have to provide free, bimonthly career services workshops, including to past employees, a free skills class for first-term students and set up a hotline that allows students to lodge complaints anonymously. The compliance monitor also could employ 'mystery shoppers,' who would pose as prospective students. Significant violations could be punished by additional penalties under the terms of the deal." (Read more)

UPDATE, Sept. 12: "Borrowers at for-profit and two-year institutions are responsible for 70 percent of student loan defaults," Adam Looney and Constantine Yannelis report in a paper for the Brookings Institution.
Written by Tim Mandell Posted at 9/10/2015 01:37:00 PM