In face of immigration crackdowns, farmers turn to inmates for labor in Southwest 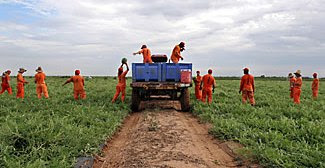 For $2 an hour, low-security inmates convicted of nonviolent crimes harvest watermelons in Arizona, where farmers have been using prison labor for almost 20 years. The demand for the inmate workforce is growing as state and federal governments crack down on the use of undocumented workers, writes Nicole Hill of The Christian Science Monitor (who took the photo).

Hill reports that a similar program has begun in , another is being considered in , and the program has never been more in demand, especially since farmers there face state fines for employing undocumented workers.The program allows cleared prisoners — about 3,300 of the state’s 37,000 prisoners — to work on private land for a minimum of $2 per hour, Hill writes. The requests for labor far outnumber the ability of the Arizona Department of Corrections to fill them, Hill writes, so “the ADC is considering innovative solutions – including satellite prisons.”

The program has detractors, such as the United Farm Workers of America and the Western Growers Association. Hill reports that the UFWA sees a food-safety concern in the use of prison labor, while the WGA says the situation points to an even greater need for a “legal, stable workforce.” (Read more)
Written by Al Cross Posted at 8/24/2007 05:53:00 PM