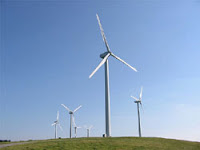 The advent of wind-energy farms in remote rural areas, combined with the rising cost of copper, is leading to damaging thefts, reports KELO-TV in Sioux Falls, S.D.: "Thieves broke into a wind tower at the Tatonka Wind energy site along the North and South Dakota border and made off with about $500 worth of copper. The damage wasn't serious, but it highlights some real challenges for rural law enforcement," such as McPherson County Sheriff David Ackerman.

Eric Schaffhauser reports, "There's a lot of land in McPherson County, not a lot of traffic, not a lot of people, but a lot of land and just one sheriff to cover it. Adding to the difficulty in his county is a major project involving 60 wind turbines going up across some of that vast, open land. He'd heard about other projects like this and the theft it can invite, but until a call he got this past week, there hadn't been much of a problem." Ackerman told Schaffhauser, "Quite honestly, it was a surprise that we didn't get called earlier." (Read more)
Written by Al Cross Posted at 11/10/2007 10:30:00 PM