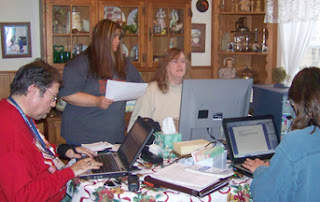 The massive ice storm that tore through the Midwest last weekend, leaving hundreds of thousands of electric customers without power, posed considerable challenges for small newspapers in the region. In the hardest-hit state, Oklahoma, the daily Norman Transcript and the weekly Oologah Lake Leader, were among the papers that had to improvise to get issues out this week. Above, Lake Leader employees, with Editor-Publisher John Wylie at left, put out the paper on the dining-room table in a staffer's home.

While Transcript publisher David Stringer looked for a nearby press that still had power, the rest of the staff looked for a place to work, because the diesel-powered generator in the newsroom only could do so much. Managing Editor Andy Steiger had hoped to use his home as a temporary newsroom, but the power was off there, too. Advertising Director Saundra Morris drove to the parking lot of a Panera Bread outlet to take advantage of the store’s free wireless access. It was full, so she worked from her car, reporter M. Scott Carter writes.

Several reporters and editors found a temporary home in the public-relations offices of Norman Regional Hospital, where they wrote and edited stories and posted them to the paper’s Web site. Stringer managed to secure some time on the press at the Edmond Sun, and a few editors made the 30-mile trip to design the print edition. (Read more)

In northeastern Oklahoma, the office of 3,000-circulation Lake Leader was without power, as were the homes of all its staff members. “We were not sure we would publish at all,” Wylie said in an interview. On Tuesday, the power returned to the home of Marketing Director Carolyn Estes, so staff packed up its production computer and set up shop on a table there. the paper was a day late for the first time, and limited to eight pages. Wylie said its Web site, www.oologah.net, would be updated frequently. (Read more)
Written by Al Cross Posted at 12/14/2007 05:22:00 PM