Rural votes are key to Huckabee's victory in Iowa 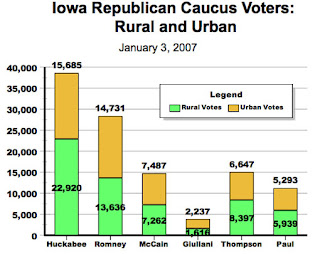 Iowa's rural counties were very important to Republican Mike Huckabee's victory in last night's presidential caucuses. They gave him 59 percent of his votes, a much higher share than his foes got in rural Iowa, according to a compilation and chart by Bill Bishop and Julie Ardery of The Daily Yonder. "Huckabee won the state with 34 percent of the vote. But, geographically, his success was uneven," they write. "Huckabee won 38 percent of the rural vote. In urban counties, however, he won just 30 percent."

In the Democratic race, winner Barack Obama's votes came mainly from urban counties, while Hillary Clinton and, especially, John Edwards got most of their votes from rural counties. "Obama, the young Illinois senator from Chicago, won rural Iowa, but he did considerably better in the cities," Bishop and Ardery report. Obama got 34 percent of the rural vote, while Edwards had 32 percent and Clinton 31 percent.

The Yonder counts nine of Iowa's 99 counties as urban. They have a little less than half the state's population. For more figures and analysis, and caucus reporting from a small newspaper in northern Iowa, click here.

Peter Shinn of Brownfield Network reports that both winners touched on agriculture issues in their victory speeches, but Huckabee had more to say: "One of the country's greatest needs is to make sure that we not only can fuel ourselves, but we can feed ourselves, and that's why farmers in states like your's and mine are important. I don't want us to have to wait until we have to let the Chinese send food over to us. My friends, if you think it's bad to depend on foreign oil, wait until this country messes up and has to depend on foreign food - that should never happen in the United States of America!" (Read more)
Written by Al Cross Posted at 1/04/2008 01:41:00 PM