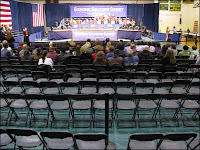 In the final days before Ohio's March 4 Democratic primary, the campaigns of Sens. Hillary Clinton and Barack Obama are devoting plenty of time to the rural voters of southeastern Ohio. The campaigns' schedules and press releases make it clear that both see the Appalachian region as key. Hillary and Bill Clinton both traveled the region for campaign events today, while former Sen. Tom Daschle and Joe Logan, president of the Ohio Farmer's Union, held a conference call with Ohio reporters to discuss Obama's agenda for rural America. (A growing crowd waited for Hillary Clinton today in Zanesville; photo from The Times-Recorder.)

Daschle and Logan praised Obama's support for country-of-origin labeling on food and a ban on meatpacker ownership of livestock, as well as his proposals for increased renewable energy such as ethanol. Much of the call was spent on such broad issues, but the first question — from The Ironton Tribune — brought the focus back to southeastern Ohio and its laid-off factory workers. Daschle said Obama's plan to increase renewable energy could create jobs in Ohio, and that Obama understands investing in education is really the best thing to help transition workers and their children to the new economy. Logan called the region "the forgotten stepchild" of Ohio's economy and said Obama's plan could help by reconnecting rural farmers and local consumers through more investments to local entrepreneurs.

The campaign gave reporters time for two more questions. One returned the discussion to biofuels. Asked to respond to recent studies about ethanol increasing greenhouse gases, both Daschle and Logan said there have been plenty of other scientists responding to those claims. Logan said corn ethanol is a "bridge technology" to switchgrass or waste products. Asked to explain his claim that Obama and Clinton differed when it came to renewable energy, Daschle said renewable energy is "a central part of his reason to run," while Clinton "has talked about it in a more passive way." Just another reminder from the Obama campaign that words matter, perhaps -- or a sign that the plans aren't all that different.

Meanwhile, both Clintons continued touring Appalachian Ohio. Today, the senator had events planned for Zanesville, Saint Claresville and Belpre. She was scheduled to attend an "Economic Solutions" summit in Zanesville at 1:30 p.m. (The Times-Recorder is blogging live from the event.) She will head to rallies in the high school gymnasiums of Saint Claresville and Belpre. On Thursday, she will attend another summit in Hanging Rock, near Ironton. Earlier this week, Bill Clinton made a swing through the area, and he was going to return for more events in Findlay, Marion, Mansfield, Wooster and New Philadelphia on Friday.

David Lightman of McClatchy Newspapers writes that Bill Clinton's stops in small-town Ohio keep him away from the national spotlight while still helping the campaign locally. "The appearance of a former president in places such as Marion and Mansfield could get voters excited and give them fresh incentive to vote for his wife," Lightman writes. "The local media are excited already. The Marion Star reported Tuesday that Clinton's visit will be the first by a president, incumbent or otherwise, since Richard Nixon stopped there 40 years ago. The Bucyrus Telegraph Forum ran a story that began with a local woman explaining that she was eager to secure a front-row seat." (Read more)
Written by Tim Wiseman Posted at 2/27/2008 12:36:00 PM