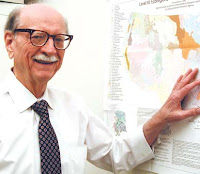 Calvin L. Beale, a senior geographer-demographer with the U.S. Department of Agriculture who concentrated much of his research on rural population trends, died of colon cancer on Monday in Washington. He was 85.

Beale "was among the first to recognize the transformation of America’s rural landscape from farms to a mixture of farms, industry and vacation homes," reports Felicity Barringer of The New York Times. She writes that Beale "developed a cult following among his peers. They marveled not just at his mastery of the theoretical tools, but also his first-hand feel for rural America." Beale was a major speaker at "Rural America, Community Issues," a 2005 seminar programmed by the Institute for Rural Journalism and Community Issues at the Knight Center for Specialized Journalism at the University of Maryland.

Beale, who began working for the USDA in 1946 and was still on the payroll, was the agency's longest-tenured employee. In 1953, he got a job as a demographer in the Department's [then] Bureau of Agricultural Economics. His rural population theories were statistically based on his own model of nine stages of rurality, widely known as "Beale codes," along with his extensive travel within the U.S. Of 3,140 counties in the nation, Mr. Beale had visited 2, 500 at the time of his death.

An accomplished author, Beale wrote a collection of writings about his travels in A Taste of the Country, published in 1990. Among the entries, he includes snapshots of little-known U.S. history he encountered, such as a mixed-race people called Melungeons in central and southern Appalachia, Barringer writes. For the rest of her story, click here. For a short USDA profile of Beale, click here.

UPDATES, Sept. 15: The Washington Post ran a delayed but lengthy obituary on Beale, by Matt Schudel; the Milwaukee Journal Sentinel ran a tribute by Bill Glauber, which pointed out that USDA officials tried to suppress Beale's finding that the number of farms was dwindling; and Julie Ardery of the Daily Yonder noted other accomplishments: "Beale’s statistical studies of U.S. populations, especially our migrations from country to city (and, sometimes, back again), helped Americans stand back from the flux of 20th century experience, the better to see how the nation was changing." (Read more) Sept. 21: National Public Radio's Howard Berkes has a long story about Beale and how he helped change federal policy, accompanied by a Jim Wildman video of Beale from five years ago and a map showing the counties whose courthouses he photographed.
Written by Aubrey Krekeler Posted at 9/03/2008 02:26:00 PM