As housing bubble burst, rural had less air to lose

The burst of the housing bubble was a largely urban phenomenon. "From early 2007 until the third quarter of '08, housing prices in rural areas have risen by two percent on average, according to figures released by the Office for Federal Housing Enterprise Oversight," writes Bill Bishop of the Daily Yonder. "During the same period, metro housing prices have declined by nearly 8 percent." 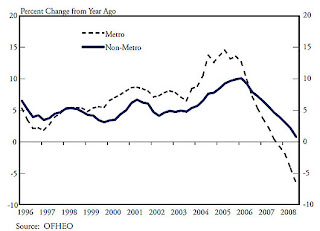 Rural home values didn't drop as sharply because, as the graph shows, they did not experience a steep price increase that preceded the decline in urban home values that followed. "There was less rise in rural home prices from 2000 to 2005 so there was less air in the bubble when it finally popped," Bishop writes.

Not all rural areas were able to avoid the sharp decline in home values. Some areas of Pacific Coats states have seen a sizable decline in home values since 2007. However, "In the West South Central region (Texas, Oklahoma, Arkansas and Louisiana), an area where rural communities have been bolstered by a strong energy-producing and agriculture economy, housing prices outside the cities have continued to grow despite the national bust," Bishop notes. Read an earlier post on the rural housing market by clicking here.
(Read more)
Written by AWM Posted at 1/07/2009 12:11:00 PM