So far rural counties have fared better in recession

The period of December 2007 through November of 2008 saw 1.26 million U.S. jobs lost, but data show nearly 99 percent were in urban and exurban counties, report Tim Murphy and Bill Bishop of the Daily Yonder. "The total number of employed workers in rural counties fell by only 14,868 during this time," "That accounts for only about 1 percent of the nation's total decline in employment." (Yonder chart) 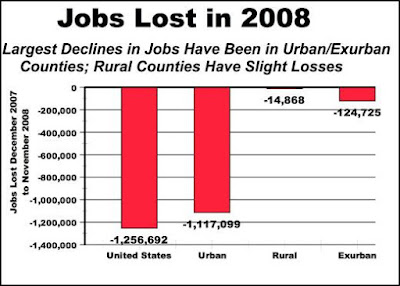 There was a good deal of disparity in rural job loss from region to region and state to state. "Job growth was particularly strong in the rural Great Plains, write Murphy and Bishop. "Iowa, Minnesota, Nebraska, North Dakota, South Dakota, Wisconsin, Kansas, Oklahoma and Texas all showed strong employment gains during the first 11 months of the recession." The rural South had the greatest concentration of job loss.

Rural America has been somewhat insulated from the recession. "Rural economies were bolstered in 2008 by high prices for grains, rising land prices, strong equipment sales, new exploration for oil and gas and large investments in renewable energy, such as wind turbines and ethanol," Murphy and Bishop note, adding that there are signs this trend is ending. While rural housing prices have not suffered and rural banks continue to make loans, "The decline in energy and agriculture is already affecting portions of rural America." (Read more)
Written by AWM Posted at 1/22/2009 02:25:00 PM