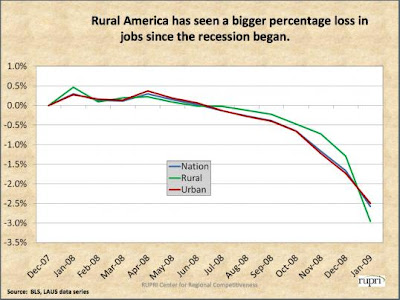 As reported here rural job losses in the recession were proportionately less than those in urban areas until November 2008. Since then, rural losses have has accelerated so quickly that they are greater than in urban areas. (Rural Policy Research Institute chart)

"Rural counties lost 3.4 percent of their jobs during the 12 months ending in January 2009," reports the Daily Yonder. "Urban counties lost 2.8 percent of their jobs." The distribution of job loss in rural America has varied. Areas with many manufacturing jobs have been hit particularly hard, while farming areas have been hurt less. Areas with mostly mining jobs have actually seen a slight increase in jobs, roughly half a percent. (Read more)
Written by AWM Posted at 3/30/2009 11:03:00 AM