Protests of mountaintop-removal mining spur predictions from both sides: things will get violent 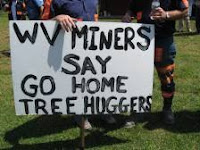 Amid a situation piece about protests and fresh counter-protests over mountaintop-removal strip mining of coal in Central Appalachia, Erica Peterson of West Virginia Public Broadcasting reports a dire prediction from both sides: Physical violence, like that of coal-related conflicts past, is coming. (Photo by Peterson)

Peterson profiles two men on opposite sides of the debate as she explores the historical implications of the controversy: Jess Baldwin, a foreman on a Pritchard Mining mountaintop job, and Chuck Nelson, a retired miner involved with Coal River Mountain Watch and the Ohio Valley Environmental Coalition, who sees coal mining as the opposite of progress.

"Both men agree that things are heating up in the coal fields," Peterson reports. "Nelson has been attending and organizing mountaintop removal protests for several years, but he hasn't seen a lot of coal miner opposition until recently." She says "both predict violence in the coalfields," and quotes Baldwin: "The men are going to start to stand up. It’s going to come to a brutal end. It is, it’s going to come to a physical thing." Nelson agrees: "It’s a wonder somebody hasn’t really got hurt bad already."

Violence has already shown up at least once in the region, at Marsh Fork Elementary School on June 23, when Ruth Tucker allegedly slapped Coal River Mountain Watch Co-Director Judy Bonds. Ken Ward Jr. of The Charleston Gazette reported in June that Tucker had been charged with battery for her role in the incident.
Written by Al Cross Posted at 8/24/2009 08:34:00 AM