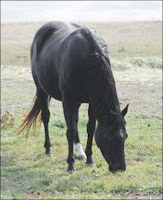 The last horse slaughterhouse in the U.S. closed two years ago, just before the start of the recession. Now those two factors have contributed to a glut in the U.S. horse market, Bess Davis of the Dickinson Press in North Dakota reports. "Older horses, aged between 10 and 15 years, that were going for $400 to $500 two years ago are now selling for about 12 to 18 cents per pound, or about $150 to $200," Davis writes. Some owners say that last years drought has made caring for horses more expensive than they can manage. (Press photo by Davis)

"Before horse-slaughter plants were made illegal in the U.S., horses that didn’t fit into a market or were too old to be bought could be sent for rendering," Davis writes. "But now many owners who can’t afford to take care of their horses and can’t sell have no choice but to send them to Canada or Mexico for slaughter." Dean Myers, a North Dakota horse farmer tells Davis, “I think the people who were against horse slaughter were very well-intentioned. I don’t think there’s any doubt about that.” But he says the inhumanity of watching a horse starve to death is worse.

Some North Dakota horse farmers reported that the market for well-bred horses hasn't been affected as much, and they still are receiving a fair price. Recent legislation in Montana has opened the possibility of building a horse-slaughter plant, but Davis reports no concrete plans are in place. Without the plants horse owners like Shirley Meyers fear prices could drop even lower: “Before, regardless of anything, you could get $500 for a horse no matter what. When you take away that basis, it gets hard.” (Read more)
Written by Jon Hale Posted at 10/19/2009 10:40:00 AM