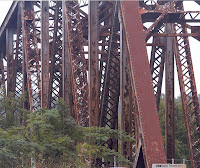 Does your community have an aging bridge, which not only looks bad but flakes toxic lead paint into the water and soil? It may be part of a national problem that has come to light in several communities around the country but has gained little national attention. That may be about to change, as one Kentucky philanthropist is putting his money and time into a cause that started with one old railroad bridge (above and below), at the northern entrance to his hometown of Bowling Green.

The CSX Transportation bridge over the inaptly named Barren River "had long been a local eyesore, as paint flaked into the river and onto its banks, but when local philanthropist David Garvin offered to restore the bridge in 2009 it became the symbol of a battle between locals and the railroad," Jon Hale writes for the Institute for Rural Journalism and Community Issues. "More than a year later, the bridge still hasn’t been painted, but testing of the banks revealed lead contamination – and questions about how many bridges across the country might be in similar condition." (Photos courtesy of David Garvin) “What started out as painting a Rust Belt image bridge has, in fact, uncovered a major national lead pollution problem on thousands of bridges across the Eastern United States,” Garvin told the Bowling Green Daily News, which has followed the case closely. He told the paper and the Institute that his sampling found lead levels at least seven times the limit for soil in a residential or play area. CSX has taken its own samples, and tests “could prompt the state to consider if it needs to look at the condition of other CSX bridges in Kentucky,” Robyn L. Minor of the Daily News reported Aug. 20.
"Concern has been raised in several states about contamination from lead paint on old bridges," Hale writes, citing examples in Minnesota, North Carolina and Connecticut. Read his story here.
Written by Al Cross Posted at 8/23/2010 12:21:00 PM