July marked the third consecutive month the rural unemployment rate was lower than the national average, but it still varied widely across the country. "Only 405 out of 2,038 rural counties — fewer than one in five — are within one percentage point of the national average unemployment rate," Bill Bishop and Roberto Gallardo report for the Daily Yonder. "States that had a large portion of their workers employed in construction and manufacturing — such as Michigan, Nevada, California and Florida — have been hit worst. Farm states and counties with significant oil and gas production have low unemployment rates."

The poor housing market, which has prevented some from moving to find work after failing to sell their homes has influenced the variance, the Yonder writes. "Four years ago, you might have been working in construction in Nevada and overpaid for your house," Annie Lowrey writes in the Washington Independent. "Today, you’re likely out of a job and, worse, can’t move to a state like North Dakota because you can’t sell the property." The news may not be good for rural America in the future: Ernest Goss’s Mainstreet Economy Index, which regularly polls bankers across rural communities in 10 Plains and Midwest states, reported Aug. 19 that four in 10 bankers expect the nation to slip back into recession in 2011. (Read more) (Yonder map below) 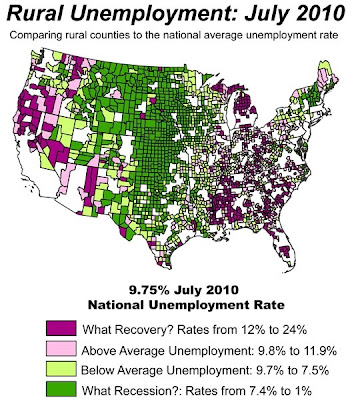