Several states legalization of medical marijuana has been a boon to an unlikely group of companies: local newspapers. "In states like Colorado, California and Montana where use of the drug for health purposes is legal, newspapers — particularly alternative weeklies — have rushed to woo marijuana providers," Jeremy W. Peters of The New York Times reports. "Many of these enterprises are flush with cash and eager to get the word out about their fledgling businesses." The benefit has also gone to daily newspapers including The Denver Post and The Bozeman Daily Chronicle in Montana. 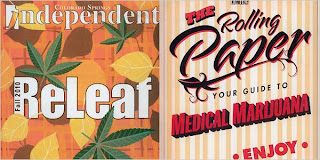 "My point of view is, for the moment at least, it’s legal," said Stephanie Pressly, publisher of The Daily Chronicle, adding that the paper generates about $7,500 a month in advertising from medical marijuana businesses. "The joke around here is that it’s a budding business." Medical marijuana advertising money helped The Colorado Springs Independent hire a new reporter and promote three staff members to full time. The paper also added a column called CannaBiz, which follows news from the industry across the country, and is written by the new marijuana beat writer. (Photo of Independent's pullout supplement "ReLeaf")

Many states have allowed legal allowances for medical marijuana for almost a decade, but an Obama administration decision to not prosecute users and suppliers of the drug as long as they complied with state laws "freed more people to market and sell it as a medical product," Peters writes. Some in the industry feel the medical marijuana advertising bubble is about to burst. The Montana legislature is expected to take up proposals to strictly regulate the drugs' use leaving The Missoula Independent, where medical marijuana advertising makes up 10 percent of the paper's revenue, fearful of a bust. "It’s been stressful for us for several years," Matt Gibson, president of The Independent, told Peters. "There’s no question that they’ve been good for our business. And we’re worried about 2011, if the state revises the statute, which it appears is all but certain." (Read more)
Written by Jon Hale Posted at 10/05/2010 03:10:00 PM

It's on the rise! Soon advertising will be everywhere.