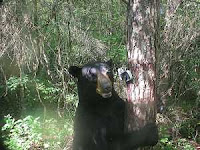 The Georgia Department of Transportation is building ursine underpasses along the routes that Georgia's bears traveled before a soon-to-be-widened highway was even envisioned. S. Heather Duncan of the Macon Telegraph reports State Route 96 will bisect the homeland of about 300 black bears in and around the Ocmulgee and Oaky Woods wildlife management areas and the Bond Swamp National Wildlife Refuge, which runs from Interstate 16 to the Ocmulgee River a few miles south of Macon. (Telegraph photo)

The road is expected to become a major east-west trucking corridor between I-16 and I-75, and road officials were concerned. The bears constitute one of three populations in the state. "Road kills will go up," said Bobby Bond, wildlife biologist for the state Department of Natural Resources. "The last thing I want is to hear someone died hitting a 200- to 300-pound bear." Of the $132 million project, $5 million will pay for the 12 wildlife underpasses, reports Duncan. The Federal Highway Administration, which is providing part of the funding, is requiring the underpasses. (Read more)
Written by Lu-Ann Farrar Posted at 11/08/2010 04:49:00 PM