Wild pigs are now an invasive species in Michigan 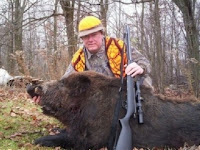 Michigan Natural Resources and Environment Director Rebecca Humphries classified feral swine as an invasive species in the state, saying they "pose a significant risk to Michigan’s wildlife, ecosystems and agricultural resources and they are a serious disease threat to humans, wildlife and domesticated pigs."  (Steve Davenport with the estimated 400-pound wild hog he shot in a neighbor's cornfield between Lansing and Flint. He first thought it was a bear.)

Agricultural and environmental groups blame the proliferation of pigs on game ranches, which are allowed to breed and hunt the animals, reports Dawson Bell of the Detroit Free Press. The Michigan legislature has until July to come up with regulations for game ranches to continue breeding the animals. (Read more)
Written by Lu-Ann Farrar Posted at 12/21/2010 11:55:00 AM