Search for a bee bugaboo suggests many causes, and bodes ill for flowering plant species 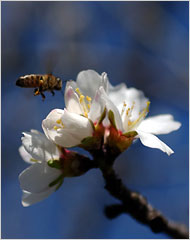 Instead of one bugaboo causing the collapse of bee colonies across the world, more than a dozen factors may be involved. "Scientists are warning that without profound changes to the way human beings manage the planet, declines in pollinators needed to feed a growing global population are likely to continue," Southwest Farm Press reports. In a new study, "Global Bee Colony Disorders and other Threats to Insect Pollinators," the UN Environment Programme found an estimated 20,000 flowering plant species could be lost over the coming decades if conservation efforts are not increased. (Photo: Bee and almond tree flower)

The study "indicates that bees are early warning indicators of wider impacts on animal and plant life and that measures to boost pollinators could not only improve food security but the fate of many other economically and environmentally-important plants and animals," Southwest Farm Press reports. The study's authors call for farmers and landowners to adopt pollinator-friendly habits, including placing flowering plants next to crop-producing fields. The report notes that managed bee hives can be moved to avoid insecticides, but wild populations are completely vulnerable to the chemicals, which have been implicated in colony collapse.

"The way humanity manages or mismanages its nature-based assets, including pollinators, will in part define our collective future in the 21st Century. The fact is that of the 100 crop species that provide 90 per cent of the world's food, over 70 are pollinated by bees," Achim Steiner, UN undersecretary-general and executive director of the environment program, said. Steiner and others are pointing to next year's Earth Summit in Rio de Janeiro as an important step in developing a global, sustainable, green economy. The summit "is an opportunity to move beyond narrow definitions of wealth and to bring the often invisible, multi-trillion dollar services of nature -- including pollination from insects such as bees -- into national and global accounts," Steiner said. (Read more)
Written by Jon Hale Posted at 3/22/2011 05:04:00 PM