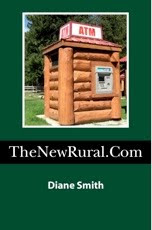 Entrepreneurship is more important than ever, and rural America stands to benefit from that importance, says the author of TheNewRural.Com. Diane Smith, who moved from Washington, D.C., to Whitefish, Mont., in 2002, says rural America is full of entrepreneurs like herself that technology has allowed to conduct nationwide business away from urban areas, Myers Reece of the Flathead Beacon reports. "I think the most creative and interesting people I know live out here," Smith, whose book centers on "the ubiquitous presence of creative businesspeople throughout rural America," said in an interview.

"In order to survive, for much of its history," Smith writes, "Rural Americans had to learn basic attributes of entrepreneurship – traits like risk taking, hard work, frugality, and self-reliance. Notably, these are the same characteristics we also use to describe America’s early pioneers." Smith adds that the Flathead River valley is equipped with the proper wired and wireless technology to foster entrepreneurship. "I travel all over America and we are emphatically competitive with the rest of America in terms of our infrastructure," Smith said. "It doesn’t mean we're done, though."

Smith identifies mobile and wired broadband networks, virtual workers, remote health care, distance learning and access to capital as necessary fundamentals for economic growth in rural areas. "Rural America should demand to be front and center on everyone’s game plan for the entrepreneurship and pioneering that our nation needs," she writes. "It’s a great place to live. It’s a great place to work. And, it’s a great time to do both. Welcome to The New Rural." (Read more)
Written by Jon Hale Posted at 4/25/2011 04:50:00 PM