Since 1938, the minimum age for work in most industries in America has been 16, but on farms it's 12, and more children -- as many as 155,000 -- are working the fields these days because of the economic downturn, Byron Pitts reported on tonight's extra edition of CBS's "60 Minutes." 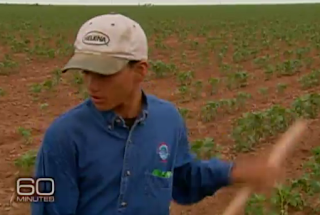 "Farming is a job many families are returning to, entire families, because children are legally alllowed to work here," Pitts said, focusing on the family (one pictured) of a Texas truck driver who lost his job, went back to the fields and took his children into "the migrant stream ... moving north with the harvest" and work that precedes it. Weeding cotton fields in the Texas Panhandle, they work 10 hours a day, six days a week, often in the sun, and when it rains they don't work and don't get paid.

"Outside of school they can work unlimited hours," Pitts noted. He said that in 1938, "Most farms were small, family operations and child labor was considered necessary." Now some disagree. "We feel the age of 12 is really, really young," said Norma Frances Lopez of the Association of Farmworker Opportunity Programs, who picked corn as a child.

The employers' side was represented by Frank Gasperini of the National Council of Agricultural Employers, who said child labor probably isn't necessary for farm productivity but provides opportunity for work, and western North Carolina vegetable farmer Keith Darnell, who said, "I don't see anything wrong with it. ... I picked when I was 12, worked for $1 an hour. It was hard, but it didn't hurt me." The story's web page is here.
Written by Al Cross Posted at 5/22/2011 09:13:00 PM

Childhood agricultural safety and health has come a long way. The latest federal data indicate a drop of nearly 60 percent in the rate of non-fatal child injuries since 1998.

Guidance in matching children to appropriate jobs, and in keeping young children away from hazards, is available in a series of resources developed by the National Children’s Center for Rural and Agricultural Health and Safety in conjunction with other safety organizations, both public and private. The Center was established in 1997 and is funded by the National Institute for Occupational Safety and Health, part of the Centers for Disease Control and Prevention.